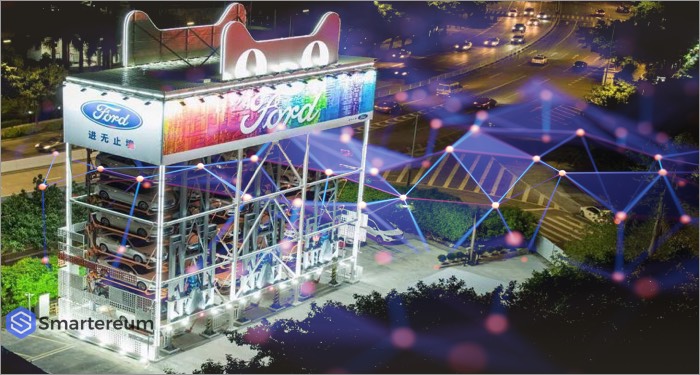 “Consumers can use the internet to access more accurate, convenient services and get a deeper understanding into particular vehicles. In the meantime, we are opening our car vending machine’s infrastructure to the entire industry to leverage and enable their distributors, in hopes of helping upgrade the automotive sector as a whole.”

This project, according to Xinhua will be done in partnership with Cainiao, a logistics company headquartered in Shenzhen and will focus on cross-border transactions. The goal is to transfer details of good for import and export to a digital ledger—that is, blockchain—so that they can easily be tracked. Information such as the country of origin, shipping port, arrival port, method of transport as well as customs details will all be recorded and tracked on the new blockchain platform.

Cainiao—also known as China Smart Logistic Network —has made significant progress in blockchain-based tracking systems since it was launched in 2013 by Alibaba alongside eight other companies. It was created to facilitate parcel deliveries between 2,000 of China’s major cities within 24 hours and has identified the use of blockchain technology as a key strategy to achieving this goal.

Through this partnership, consumers in regions covered by Cainiao will now be able to track information of over 30,000 goods from over 50 countries using Alibaba’s e-commerce mobile app. Cainiao services have covered major Chinese cities including Shanghai, Shenzhen, and Guangzhou.

After being hit by bad publicity regarding counterfeit products, Alibaba has taken several measures to restore consumer trust in its products; this includes partnerships with Lois Vuitton, Samsung, and PwC. The last, an agreement to fight food fraud using blockchain technology.

Alibaba’s T-Mall would become one of the many e-commerce platforms adopting blockchain. Japanese’ Rakuten announced plans to adopt a blockchain-powered loyalty system earlier this week.

Ford has just been awarded a new patent that may allow the giant auto company to enable cryptocurrency transactions for auto communication.

The patent is meant to allow vehicle-to-vehicle cooperation. It was published on Tuesday 27th of March 2018. The patent focuses on different ways to reduce traffic congestion including using communication between vehicles to coordinate speed. This will, to a degree, contract the psychology of drivers who only care about their time and preferences while driving.

The document states that there will be a Cooperatively Managed Pass and Merge (CMMP) system that will allow the monitoring, and, evaluation of driving behavior.

This will be powered by a cryptocurrency called CMMP tokens. It will facilitate the transmission of messages between various vehicles.

The tokens will also be used as an on-the-road credit within the proposed system.

The time allotted to the consumer vehicle’s request will depend on the tokens the customer chooses. It will be spent at a particular time.

Even though blockchain technology is not yet involved in this partnership, its certainly possible to explore further uses of decentralized car to car communication using blockchain to help track car’s whereabouts and other use-full features.