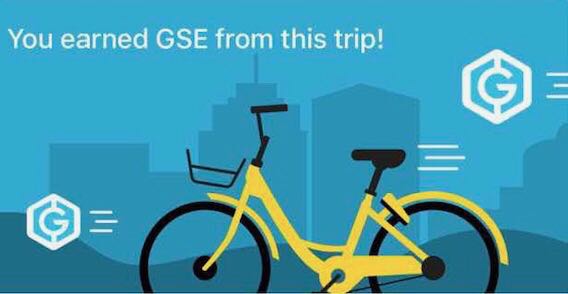 Ofo users in Singapore have noticed a new feature in their ofo app on 28th March. This appears to be part of their ‘Ride to Mine’ campaign, where users will be rewarded tokens upon completion of their rides, with the project being based on the blockchain technology.

Here are a few screenshots from the ofo Singapore app. As illustrated, ofo users will receive GSE tokens by riding, and are able to use these tokens in different scenarios within the broader sharing economy or trade with other tokens in the near future.

Ofo’s competitor, Mobike, voted in its shareholders’ meeting yesterday and passed the Meituan acquisition case. There is without a doubt that the two biggest players in the bike-sharing sector are making ambitious moves one after another, creating a competitive landscape that is constantly in flux.

As a leading technology, blockchain is spreading its influence around the world, with applications across various industries. Its unique proposition, largely due to its decentralization and immutability, makes it an ideal technology for industries such as finance, entertainment, law, IoT, etc. Despite that, applications of blockchain within the sharing economy remains rare yet it is apparent that ofo wants to be the trailblazer to pioneer the marriage of blockchain and sharing economy.

This will not be the first time where ofo attempts to venture into blockchain technology projects. According to published information, on 8th February, Ethereum block browser’s data indicated that the ofo chain was testing its network. Since then, there has been speculations that ofo would set foot into blockchain and issue tokens based on ERC20. The total amount of tokens issued was said to be around 100 million yuan. However, ofo denied the rumor and expressed that it was an inaccurate news spun to leverage its brand reputation for their own gains.

According to Li Xiaolai, self-proclaimed “richest Chinese in Bitcoin”, who disclosed in a WeChat group that ofo seems to be preparing for an ICO. Subsequently, Chen Weixing, who is in the same WeChat group, stated that ofo has discussed with him on numerous occasions pertaining to the best practices to conduct blockchain trials. It was later confirmed that ofo never considered an ICO and simply wanted to use blockchain and token to design new production relations.

Referencing the above information, ofo’s venture into blockchain appears to be true. They have chosen to do a trial run in Singapore because the blockchain technology environment there is more flexible. Combining the concept of sharing economy with blockchain also allows ofo to be more competitive and ambitious in its long-term business plan.

Crypotocurrency Exchange news, reviews and guides are provided by Smartereum team to inform and educate our viewers. You can find more helpful guides here