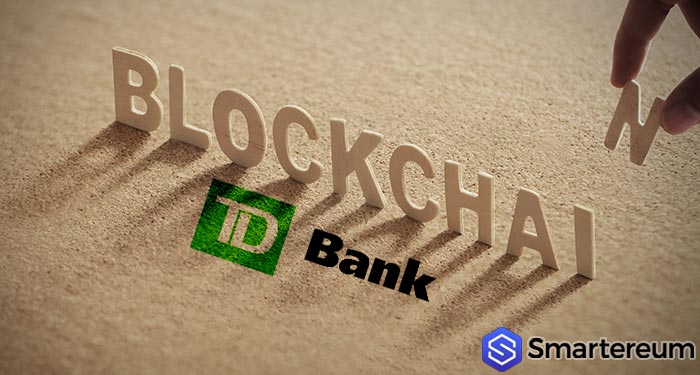 The rise in the use of blockchain technology has caught the attention of a North American financial institution Toronto-Dominion (TD) Bank which is currently planning on using the technology to track assets digitally on the public ledger.

According to the patent titled “REAL TIME VIRTUAL DRAFT SYSTEM AND METHOD” published on the USPTO website, TD bank wants to use the blockchain to help track transactions through point-of-sale (POS) systems. It describes the method as a software that would initiate a block of information sold from one client to another with the transaction data stored and the cumulative value provided in a fiat currency.

It further explains that the technology would include a storage device and a processor linked to the storage device, however, the storage device would hold the software instructions that would control the processor. The published patent abstract adds that “One advantage of block[chain] based ledgers is the public nature of the blockchain architecture that allows anyone in the public to review the content of the ledger and verify ownership,” the document also explains that. “The decentralized blockchain approach also makes the system fairly robust in comparison to centralized server systems by allowing multiple distributed networks to verify the contents of a single ledger.”

The advantage of a decentralized ledger is that it reduces the risk of false information of the ledgers, sine that due to the large size of the blockchain technology could become almost impossible to search and identify individual transactions.

A period for Blockchain Technology to blossom

Major financial and technology companies are now looking at harnessing the benefits of blockchain technology. Industry experts believe that this trend is highly advantageous as it brings more investors and invariably more spending towards developing this transformative technology.

Other companies that were aggressive with blockchain patents include the Bank of England which has published a blueprint to indicate its vision for a renewed Real Time Gross Settlement (RTGS) service. The new service is meant to deliver a stronger, flexible and more resilient settlement system for the United Kingdom. This is in view of the fast-changing payment system in the UK.

Another major financial institution, Bank of America has around 43 patents applied for the blockchain technology. Others include the United States Postal Service, Intel, and Cisco.