Smartereum
Home Cryptocurrency Ethereum Indians are more interested in Ethereum than other Cryptocurrencies including Bitcoin –... 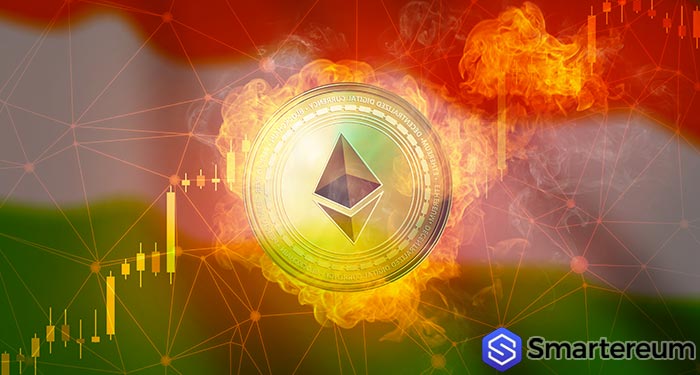 With the current fascination with cryptocurrency, various other digital currency is been highly sought after in the industry. The most searched for cryptocurrency in India is Ethereum, according to statistics data from Internet service providers, Jana.

Over the past five months, Ethereum has been the most searched for indicating a shift towards the altcoin. India has a blossoming cryptocurrency ecosystem and interest in crypto-activities is still at its peak. According to the data from Jana, Ethereum represents 34.4 percent searches while Bitcoin comes second with 29.9 percent. Other crypto searches include BuyUCoin NEM with a 21.2% share, and Dash, NEO, Litecoin, Ripple, and Monero captured 5% or less.

Jana, the parent company of mCent browser software, analyzed several cryptocurrency and exchange related search across India on its platform – in a research and found out that searches for Ethereum doubled searches for Bitcoin in February. Although search volume does not indicate that ethereum transactions are more than that of Bitcoin, it is just an indication of increased momentum and interest of the digital currency.

Interest in cryptocurrency dropped noticeably in India by the start of 2018 after the country’s finance minister Arun Jaitley stated in his budget speech in February that cryptocurrency would not be accepted as a legal tender in India. He further warned that a government panel recommended closing down crypto-exchanges based in India.

In his speech, he said that “The government recommending shutting down exchanges and limiting currencies altogether, coupled with the decline in prices, has led to the feverish pitch waning away dramatically,” Jaitley further stated that “There are still quite a lot of searches but maybe we’re getting closer to what a true steady state should look like.”

In terms of exchange searches, the most exchange being searched for includes Unicoin with 52.27 percent, Zebpay with 30.72 percent, BuyUcoin with 6.92 percent.