Smartereum
Home Cryptocurrency Bitcoin Bitcoin vs Ethereum: Is Ethereum the Same as Bitcoin? Can Ethereum go over... 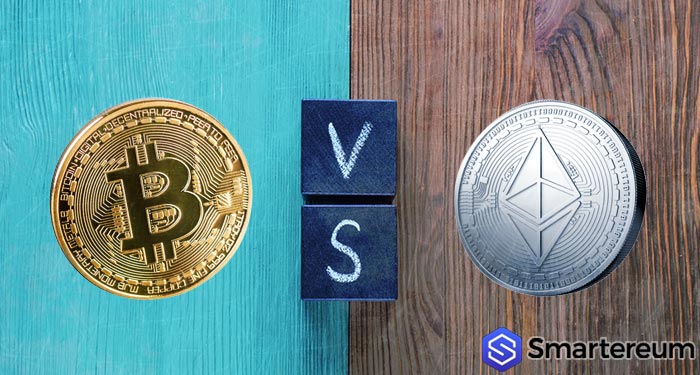 Thanks to the historical rise in the value of Bitcoin last year, more people now know about the existence of Bitcoin and its relative Ethereum. Regarding market capitalization, both cryptocurrencies are valuable with Bitcoin taking the first position and Ethereum at the third. Both Bitcoin and Ethereum are tradable, and both can be used to pay for services. So, what differentiates one from the other?

Since 2009, Bitcoin has been in circulation globally. It was the first cryptocurrency ever to be created. Ethereum, on the other hand, went live in 2015. Note that many other cryptocurrencies emerged in this window. However, they none of them were able to improve on any aspect of Bitcoins performance regarding speed, transaction anonymity, and, security. Ethereum is faster than Bitcoin. An Ethereum transaction can be concluded within minutes. It is blockchain based and serves as a store of value just like Bitcoin.

Bitcoins blockchain can be seen as a database of accounts with currency stored in each, Ethereum’s blockchain is a more sophisticated system that can store computer codes which can tap from the CPU power going into the network.

While Bitcoin’s currency is called Bitcoin, the currency that fuels the Ethereum network is called Ether. Companies, government, and individuals buy Ether in a bid to tap into the network and run their apps. Smart contracts run these applications. Smart contracts are Ethereum’s way of automating contracts and agreements enabling them to be executed in consensus. Although smart contracts might appear simple, they can be applied to different accepts of life from enabling payment to workers on job completion to transferring ownership of a property after the sale.

Also, the Ethereum network permits the creation of other cryptocurrencies with the same Ether protocol but on different blockchains. The blockchain can either be public or private.

So, no, Ethereum is not the same thing as Bitcoin. It is a more complex system that promises to change the world with smart contracts. If you were to choose an investment of either Ether or Bitcoin, which would it be?