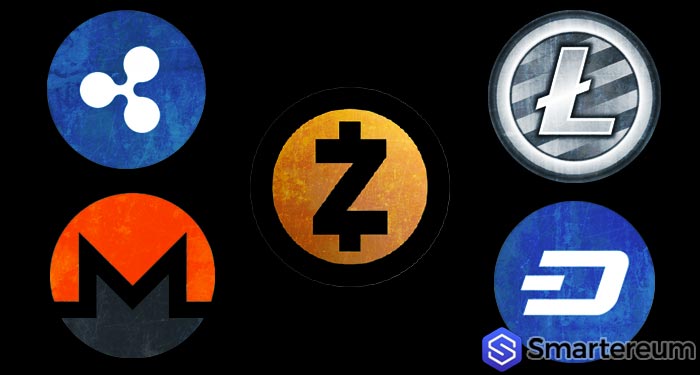 This is a decentralized cryptocurrency that was launched in 2016 and has shown some promise since then. The network offers selective transparency and privacy to users. You’ll be provided with extra security and the details about the people involved in a transaction will be private.

Litecoin is one of the cryptocurrencies that was developed after Bitcoin. People often refer to it as the silver to Bitcoins gold. Created by Charlie Lee, Litecoin is an open source payment network that is decentralized. It uses scrypt to prevent dishonesty in the network. Its block generation rate is faster than Bitcoin enabling faster transactions.

Ripple provides users with instant, low-cost international payments. It helps banks settle oversea payments in real time. The network is transparent and has managed to gain the interest of the cryptocurrency industry.

Another secure, untraceable and private cryptocurrency is Monero. It is an open source cryptocurrency network that was launched in April 2014. The network emphasizes decentralization and scalability.

Originally called Darkcoin, Dash has proven itself to be a more private version of Bitcoin. It offers users maximum anonymity. It works with a decentralized master code that makes all transactions untraceable. Dash was launched in 2014.

These are five best cryptocurrencies to invest in other than Bitcoin and Ethereum. Bitcoin is still the leader of the pack and nothing suggests that it will lose this is position soon. So, it’s a good idea to add Bitcoin to your investments.