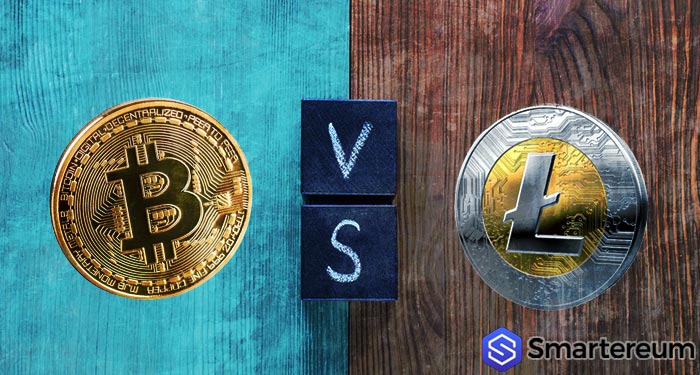 What’s The Difference Between Litecoin and Bitcoin?

To maintain the value of all cryptocurrencies, there is always a predetermined stop number. For Bitcoin, mining will stop when the number reaches 21 million coins in circulation. For Litecoin, however, mining will stop when there are 84 million coins in circulation. While this may seem like an advantage Litecoin has over Bitcoin, it doesn’t necessarily increase Litecoin’s value.

While Bitcoin is run with the SHA-256 algorithm, Litecoin depends on Scrypt. This is the most important difference between both cryptocurrencies. Scrypt is comparatively new compared to SHA-256. These algorithms impact mining differently. The transaction confirmation process in Bitcoin requires substantial power. It is more complex than the Scrypt algorithm which uses less computing power making it more accessible to the users.

Although all cryptocurrency transactions occur instantly, the time required for confirmation varies from network to network. While Bitcoin’s average transaction confirmation speed is 10 minutes, the Litecoin network requires about 2.5 minutes to confirm a single transaction.

Litecoin and Bitcoin are the silver and gold of cryptocurrencies. Both have grown significantly over the years and have shown promise in the cryptoverse. No one knows if both coins will retain their positions in the coming months talkless of years. The structure of the industry can change significantly over a period of a few months.