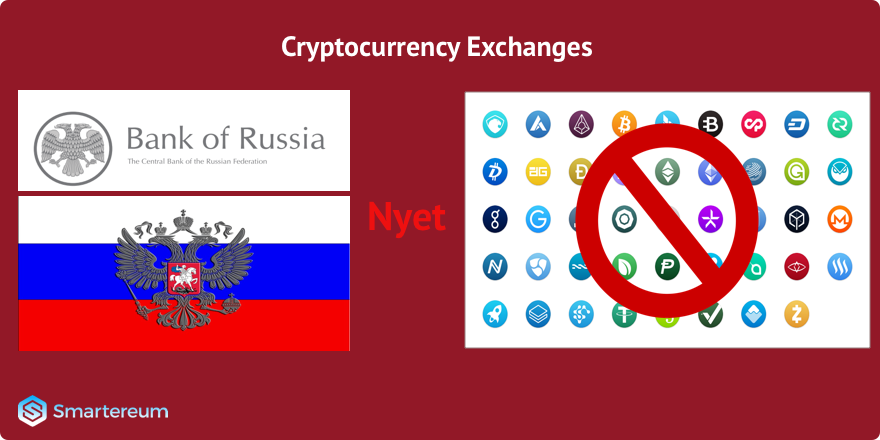 Bank of Russia has announced plans to shut down websites that offer Cryptocurrency Exchanges. RBC reports that the announcement was made on Tuesday at the XII International Forum “Russian Derivatives Market 2017”, by the First Deputy Chairman of the Central Bank, Sergey Shvetsov.

This line of action follows a press release in September warning citizens about private virtual currencies (a.k.a. cryptocurrencies). The warning expressed fears that since cryptocurrencies were issued anonymously, they could be used in illegal activities such as money laundering, tax evasion and sponsoring terrorism. It also promised to define and regulate cryptocurrencies within the Russian Federation.

Russia’s apprehension towards cryptocurrencies dates back although they have a softer stance towards the blockchain technology that supports it. Russia developed and tested a blockchain application for Russian banks in October last year. Russia’s Deputy Finance Minister, Alexey Moiseev explained this much. In his words “we are engaged in legalizing the blockage in terms of it as a mechanism for processing data so that the information stored in the blockroom has the same legal force as the information that is stored in other formats”.

The Bank believes cryptocurrency is a pyramid scheme with very risks more than it is, a payment system. Moiseev said that the Ministry of Finance advocates limiting access to only qualified investors since such investments are too dangerous for ordinary people. So their action is put forth as a move to protect the people.

At a meeting on Tuesday, Russia’s president, Vladimir Putin took out time to convey his position on the issue of cryptocurrency. In his speech, Putin validated the concerns of the Central Bank but also stressed the need “not to put up too many barriers”.
Putin met with the founder of Ethereum, Vitalik Buterin in June and pledged his support for the development of blockchain technology in Russia.
The Russian president has a clear direction of what needs to be done. He said;
“We need – based on international experience – to build a regulatory environment that will make it possible to codify relations in this sphere, reliably protect the interests of citizens, businesses, and the state and provide legal guarantees for using innovative financial instruments.”

It is therefore unlikely Russia would issue an outright ban like we saw in China and South Korea last month.