Lition was launched earlier in the year and has already been licensed as an energy supplier in 12 major cities in Germany. Some include Hamburg, Berlin and Munich who have subscribed to its decentralized energy market. The project was built on the Blockchain of Ethereum, and it connects users directly with small or large energy providers.

Presently, over 700 households in Germany are using this decentralized platform to buy energy.

The company is trying to disrupt how global energy works using a concept that is familiar to Blockchain evangelists. Bypassing the middlemen help users save money on energy.

In households, energy suppliers sell electric energy or solar to an intermediary and customers buy from that intermediary.

Here, the problem lies with the multinational intermediaries who have too much control and do not give the consumers the choice of what energy to buy.

The solution of the company is to remove the middleman completely.

“Our energy exchange connects customers and producers directly. Producers put their energy on the exchange and then customers can buy it,”

“Usually buying directly from producers is limited to energy suppliers that are big corporations. We’re bringing the exchange to the consumer, so consumers can pay for the energy they want.”

Cutting out the middleman reduces costs as well. According to Lition, the customer could save up to twenty percent on utility bills. Also, it increases the revenue of power plants by thirty percent.

Lition users can pick from the categories of solar, wind or biomass. They can also choose the best provider which may be the cheapest option.

When a user finds the preferred energy they want to purchase, they can pay in euros to Lition. An Ethereum smart contract works behind the scenes to detect this payment and send the energy automatically to the client.

“Lition’s …. blockchain technology simplifies the process of buying energy directly from green producers of any scale by employing transparent smart contracts that allow consumers to circumvent all of the complexity of energy distribution brokers,”

Presently, users are only accepted from Germany where the company is licensed to operate. Users who want to purchase energy with the company’s market can inquire on the website. There is a price estimator feature that works with the postal code of the user.

Struggles of the Blockchain

There is some bad news; like other companies, they have issues with Ethereum.

“Ethereum is not a good system,”

He appreciated the platform nonetheless and said that it is permissionless and open. However, he still lists some problems that the company have faced.

“It’s very slow. It takes 20 to 30 seconds to tell a customer whether they can buy energy or not,”

Lohwasser added that as a firm attempting to promote renewable energy, they feel uneasy about using a Blockchain that relies on mining as this is an energy-sucking process.

The company is already on the lookout for something better. Sadly, they have been unable to find one that is both scalable and permissionless. 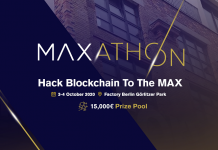