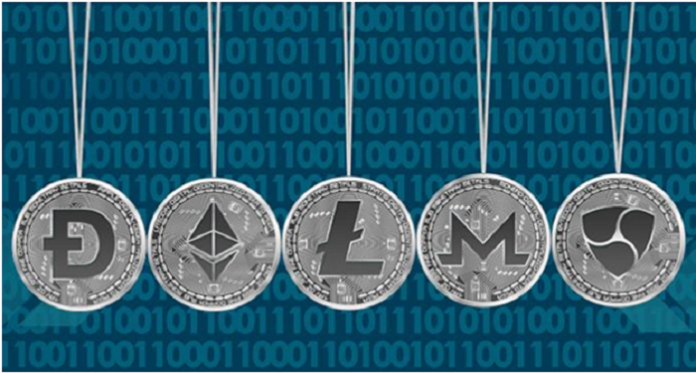 Bitcoin is widely regarded as the Founding Father of all contemporary cryptocurrencies. People first heard of Bitcoin in 2009 when Satoshi Nakamoto, whose identity still remains unknown, revealed an open-source code that was actually an improved conceptualization of a cryptography method known as blockchain. Nakamoto has successfully implemented a proof-of-work algorithm that came to be known as the bitcoin software.

Bitcoin laid a foundation for the development of other cryptocurrencies which obtained the collective name ‘alternative coins’ – altcoins. Less than ten years later since Bitcoin emergence, we officially have more than 1600 cryptocurrencies, with new kinds of this digital cash being introduced almost on a weekly basis. They are based on different algorithms and blockchain types, have different value and purpose, some of which will be described later in the article, but Bitcoin still remains a dominant currency that usually sets the market trends for the rest.

However, everything indicates that this prevalent position is gradually diminishing with altcoins gaining more popularity as well as market capitalization.

According to the study conducted by the employees of the City University of London, there are 600 cryptocurrencies, aside from Bitcoin, which are being actively traded on crypto exchanges around the world. Coinmarketcap shows that the percentage of total market capitalization (TCM), also known as ‘dominance’, of Bitcoin with regard to altcoins has been reducing exponentially. In 2017, Bitcoin held as much as 86.29% of TCM, but in just two years it was reduced to 47%. It means that altcoins will continue to attain a strong footing in the crypto world and have more and more fields of application, with online gambling certainly being among the most popular ones.

Popular altcoins and their scope of use

Nowadays, when speaking of cryptocurrencies there is no way to avoid mentioning Ethereum, or Ether, a digital token that is the lifeblood of the blockchain operating system of the same name. Thanks to this platform, users can create smart contracts, a protocol that provides means for carrying out credible transactions without any intermediaries. Ether is probably the most popular altcoin today because it is widely accepted as a mean for investment in blockchain startups.

Litecoin is often referred to as the ‘younger brother’ of Bitcoin because it is basically a slightly improved version of BTC. Nevertheless, it enjoys vast popularity because of its superior transaction confirmation mechanism known as the Litecoin Network.

Dash is also a reformed version of Bitcoin which uses several cryptographic algorithms and the system of master nodes to allow for almost instant transactions.

Monero is based on the CryptoNote protocol that ensures the unparalleled level of anonymity along with the obfuscation, the act of making something incomprehensible, of all transactions thus making them impossible to trace.

As you can see, these altcoins have different foundation and functionality, but all of them, as well as more than a dozen other cryptocurrencies, can be used for making bets on sports and playing in online casino at 1xBit, the most crypto-friendly gambling platform around.

If you are a crypto enthusiast who also likes to bet on sports or play in live online casinos, but just couldn’t seem to find the all-for-crypto platform that will cater to your needs, then look no further than 1xBit. Acting in compliance with the concept of total anonymity, 1xBit doesn’t gather any personal information from new users and allows them to play in a safe and confidential environment thanks to the one-click registration process. All deposits/withdrawals are carried out almost instantly and at a very low to no-fee basis. 1xBit broadens the scope of use of altcoins by providing a fully-fledged crypto-oriented gambling platform.